Here is a slowly growing selection of bicycles that are awesome and why I think so.....

Blue to White faded bicycle with brown leather tassels and saddle
The title pretty much sums up why this bike is awesome. Not only is the colour pretty but it fades from white to blue, tassels are also something that is missing from most adult bicycles and this one brings them back in style with brown leather to match the saddle and all on a classic Swiss frame. Saw it parked near the Letzipark shopping  centre here in Zurich. 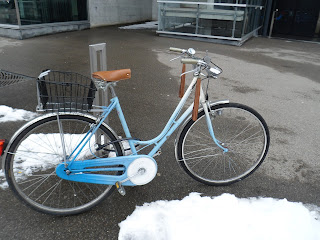 White Tandem Bicycle
So it's not everyday you see a tandem bicycle casually parked in town, which is my I though it was worth taking a quick picture. The rear saddle seems quite low so I'm assuming the bike must be for a parent and child? 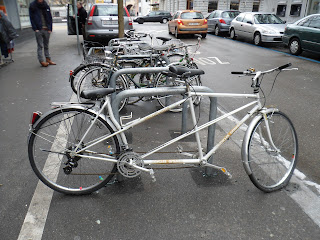 Sand covered bicycle with red accessories
So while out my the Limmat in Zurich I will usually notice a whole host of awesome bicycles, but with out wanting to seem like a complete weirdo I don't take too many photos when there are loads of people around. However this particular bicycle did necessitate a photograph, this bicycle has been covered in sand, not very fine sand mind you more of a grit, but none the less it is permanently pasted on. That and the Red trimmings make this bike really cool. 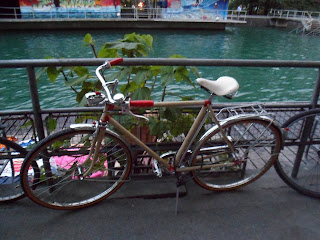 Custom painted Stripes,
After a short spell in Zurich I have started to notice a few trends in bicycles..... stripes. whether this is a fashion statement or an anti theft tactic is yet unclear to me, however one thing is clear, I think these bikes are cool, and earlier I saw one that was completely decked out like a rainbow with electrical tape. The only downside was that since it was being cycled past me I couldn't take a picture. 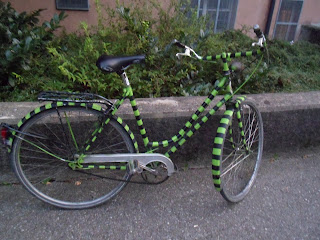 Purple custom vintage looky likey
Okay so ill be honest here the first thing that caught my eye about this bicycle was the colour, purple with white accessories is cool. But then when I stopped for the photo I noticed a whole heap of things that make this bicycle one of the most cool bicycles ever.
First of all from a distance this looks like a vintage ladies bicycle. Now Stop. The frame is indeed a step through split frame. But look closer..... there are no labels or decals. this frame has been custom repainted, then look at the saddle, brand new. This bicycle also has an impressive amount of little gadgets, at the front of the bike is what looks like one of those very fancy speedometers, and clip on light at the back all in white! The front carrier is something I'm slowly starting to a big fan of, probably just for the asthetic.
But of all the things the "piece de la resistance" are the mud guards, I'd recommend going for a close up on this one, but check em out their just strips of bended aluminium. Ultra modern and minimalist retro. Definitely one of the most Awesome (capital A) bicycles yet. 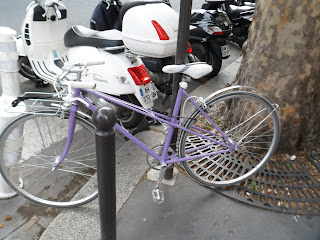 Bicycle decoration WIN
I regularly see this bicycle parked near my house in the 11th. It's not so much the bicycle that attracted my attention, but the amount of attention that someone has put into decorating it, if you look at the close up photo you will notice that all of the spokes on the wheels are covered in those little size indicators that usually are on hangers in clothes shops.
Then the icing on the cake is the head piece at the front of the bicycle. A golden horses head adorns this normally unremarkable bike and screams "this is my rolls royce". Owner I salut you and also would like to inquire where do you purchase a bicycle mountable horses head? 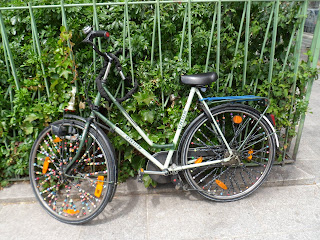 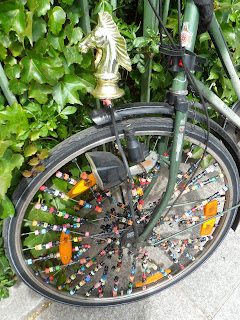 Yellow saddled Topbike
The colour combination on this bike is very cool, first of all is the blue handle bar grip and frame, and sure why have things matching when you can have a canary yellow saddle. Shizzam, seriously I'd love to know where you can buy these? 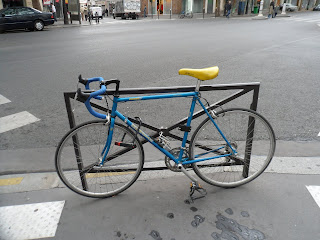 iBike
This is clearly a custom fixy bicycle from someone who uses Mac products. I'm not a mac user myself, mainly due to the fact that I can't afford an overpriced over designed object that can do the same thing as a PC, and I guess that's how I roll with my bicycles too. 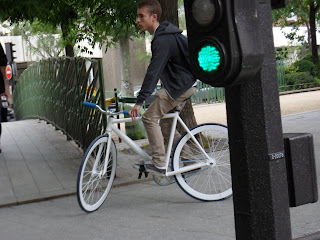 White Abandoned Vintage
This bicycle is really cool and has brake cables that match the saddle as well as oxidised dimpled mudguards. The sad thing is that the person who owns this bicycle clearly does not take care of it as it is always there and has a punctured front tyre. 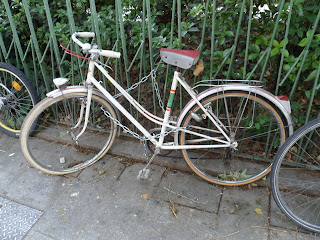 Black Gazelle
This Holland style town bike first caught my eye because it has a set of Brooks handles, while I thought the brooks company limited themselves to saddles I was clearly wrong. this person clearly loves their bicycle and must also have an expensive brooks saddle which it looks like they wisely remove when they park their bicycle. the saddle bags chain guard and overall cool look of the bicycle mean even though this bicycle is a boring black I think it is awesome. 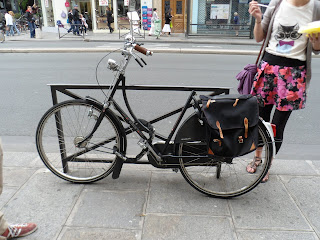 Green Peugeot
This bicycle is the exact version of my orange bicycle but in green, being Irish I suppose you can blame this on my current infatuation with green bicycles (see below). This bicycle was located just outside a supermarket by republic, and I just had time to take a photo of it before the owner came out. 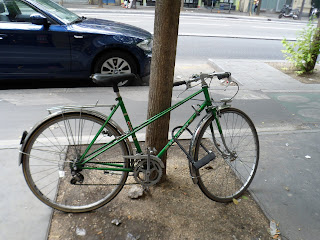 Blue B'Twin
While this is just one of those standard b'twin bicycles from decathlon, the thing I like about this is that the owner clearly decided to reject conformity and spray it (granted badly) with a can of blue spray. Go individualism in a world of standards! 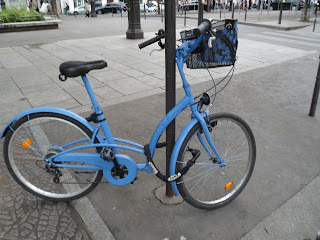 Green Peugeot Helium
I love this bicycle because it is a green version of my blue Helium bicycle, okay so there are a few differences, such as this bicycle being in better condition(except for the punctured back tyre) and having a really cool front light, but it still reminds me of my first bicycle here in Paris and with a funkier colour and matching lock. Look after your bicycles people! 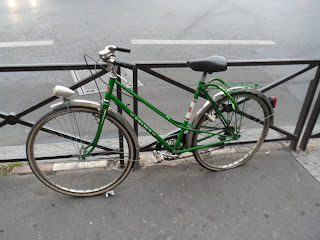 A Gazelle wearing Blue
This bicycle plays on the blue theme with an really cool blue saddle and blue break cables... god I love accessories. This was located on the way to a friends house in the 12th. 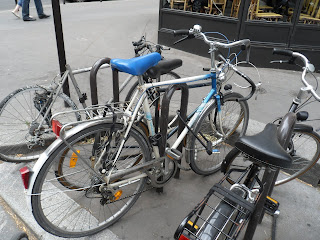 Yellow Child's Bicycle
This cute child's bicycle is located right outside the door to my apartment and oddly enough had 2 locks when it first arrived. I'm not any good with kids but what age group of child would ride this? 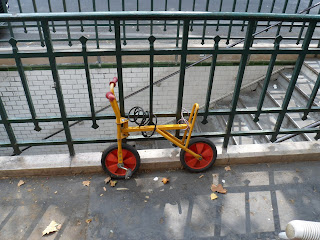 Blue and Orange Custom Fixy
Clearly a custom number with a great choice of colours, this photo was taken just outside the Grand Palais, so this person might also have an interest in Art. Just 1 gear on this fixy bike. 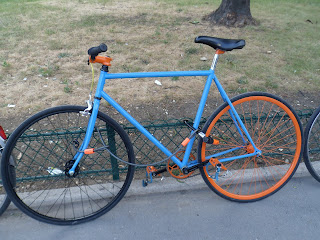 Green Peugeot
Yes another green Peugot, this one is a little newer and not from the same era as my orange bicycle, still though I love the colour. 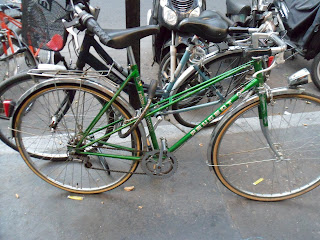 Beach Cruiser with nice decals
A flowery low rider by the canal, while I would probably never own a bicycle with these colours and flower stickers, I have to admire the love that the owner clearly has for this bicycle. 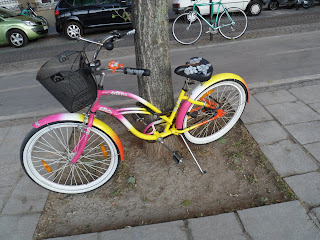 Neon Chok
Vélo "chok" neon madness by Hotel de Ville, these style of bikes are available at Go sport, while I was originally impressed with the brightness of the neon colours of this bicycle thinking it was a custom job, I was actually disappointed to find that these are standards available in Go Sport. However I do admire the kind of person it takes to ride this bicycle through town. 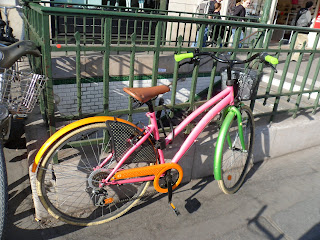 White Peugeot Racer
Red saddle on a vintage Peugeot racer, with chequered break cables, this lovely bicycle was is the row of bikes when I parked to visit the Middle Age Museum. Can you spot my bike in the background 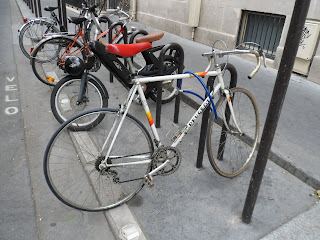 Not Awesome Handlebars?
Here is one from those saps that turn the handle bars upside down cause its "cool", I dunno maybe it is just more practical and easy to use, I haven't tried one out yet. 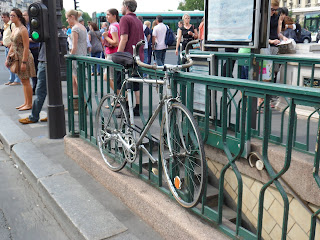 Don Draper - the Dilecta Le Blanc
Katie Thomsons new bike along side my own - its a vintage from the 40/50s Dilecta Le Blanc and is called Don Draper. She bought it on a visit to the flea market, and he has an awesome front light and saddle. 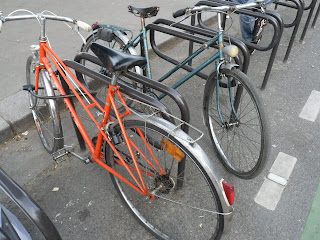 Orange Mens Peugeot
I spotted this gem while cycling home one early Sunday morning, The boys versions of my orange bicycle!! 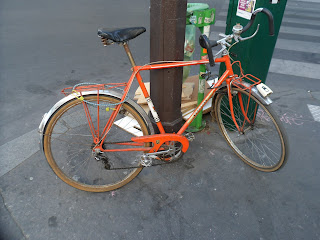 The bicycles checking each other out 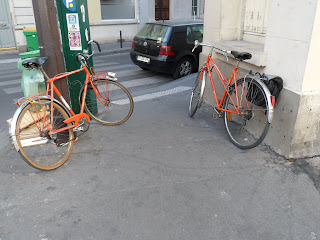 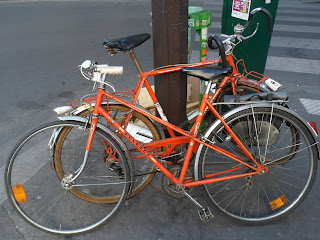 Small Orange love Child
Just in case you were all wondering what happens when 2 orange bicycles make love, I have taken a photo of the result. This small folding town bike is all the rage right now as its size and weight mean carrying it on public transport is possible. 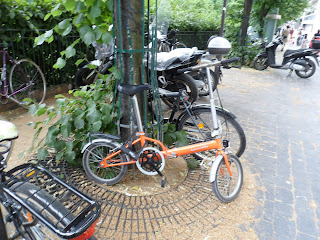