As far as cycle lanes are concerned in Paris I must admit that there is a pretty good selection.
This Map is the best one I could find online, and I think its from 2008. 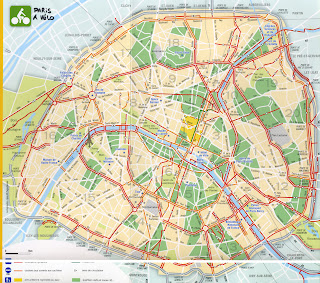 If you are still not sure if there are bike lanes availible than you can check out this dedicated website which indicates the best route to take from one destination to another and what type of lane you are using. Also very handy is the option of picking a safer route, with a maximum of bicycle lanes.

Bicycle Lane Website for Paris
Its worth also mentioning the vast improvements that Paris has made in its cycle lanes, this is especially clear when you note the difference in the above map and the map from my 2000 map book. 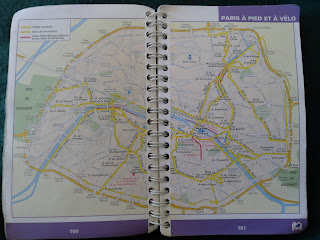 Ill get the most recent one asap.

Some are combined bus bike lanes, some are isolated from the main traffic and some are located on the foot paths.

The isolated bicycle only lane
My favourite kind are the ones on the road but isolated from the main traffic by a low concrete barrier. Such as this lovely bicycle lane on Boulevard Richard le Noir near my new apartment. This means that traffic can not enter your lane and pedestrians don't walk on it, as that can often happen when the bike lane is on a footpath.
Dual bicycle lane on a path
Here is another example of a nice dual bicycle lane along the north bank of the Seine. The only downside to this style of lane is the pedestrians who unknown to them selves cross over into the lane, especially when they exit from the metro station on the left.

Bicycle lane adjacent to traffic
Here is a good example of a bicycle lanes to watch out for, this one is just what I would describe as a token white line on the side of the road. While it is independent from the main traffic the buses still have to pull into it to pick up people. The green bus parked in the middle of the bicycle lane in this picture had in fact cut me off moments earlier, nearly squashing me up against the path.

Combined bus, taxi, bicycle lane
This is a combined bus and bicycle lane. These are very common and will usually also be shared by taxis. The big downside with these lanes is again the shared usage, often the buses and taxis will pull in right in front of you with no warning forcing you make a wild turn onto the left side of the lane.
I usually find one of the safest options is to use the left side of these bicycle lanes.
Contra-flow bicycle lane
The newest kind of "bicycle lane" in Paris is the contra flow bicycle lane. This is basically a lane where you hurtle yourself at on coming traffic in a super narrow one way street. The down side of this kind of lane is the fact that cars usually have no idea that you have the right to go against the flow of the traffic and are usually not very accommodating about letting you pass. this results in them swinging out of the way of your bicycle in the nick of time. This immanent and obvious risk to you life approaching you at moderate but yet determined speed usually results in these lanes having to be undertaken at a very slow speed. These lanes are usually spotted with a sign which indicated "sauf velo" under a no entry road sign and then proceeds to have bicycles with and arrow painted along one side of the road.

Also very entertaining is this video about cycling in bicycle lanes in New York.


The more bike lanes will be posted soon.