Putting your bicycle to work 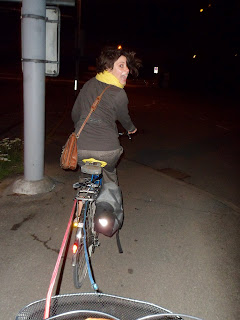 We are all aware of how great cycling for leisure is but for a long time now I have been using my bicycle not only as personal transport but as a tool to transport possessions and even shopping. This idea of the bicycle as a "pack horse" not just a "show pony" has been around for years, especially in eastern countries where a single bicycle carries the whole family and pets. Once I even managed to pack enough for a 2 month cycling and camping holidays on the back of my bike.

Here I also regularly take advantage of my bikes ability to carry large loads and thanks to my handy Clip on bike bag(see pic), two bungee cords which I permanently keep in a little saddle bag and my new basket which clips into the carrier I am able to easily able to transport many items at a moments notice.

Recently though I put my bike though another more taxing test by actually towing my flat mate (KK) and her bike home.
On a typical Wednesday after a few calm drinks we were both on our way home when  KK's bike chain slips off, this was not too much of a shock as it had been acting up a lot recently. However what was more annoying in this case was that the chain had some how managed to get properly wedged into the gear mechanism and it was going to require at least a screw driver to slove the problem.

However being determined to get the bicycle home to fix the problem I used my handy bunjee cords and simply clipped them on to her front basket to my carrier and started pedalling, much to the disbelief of KK.

The result was actually pretty good. Granted I was now pedaling for two people but apart from being a somewhat slower it was not an exhausting experience. The only slight problem was that since the cords were elastic they would not pull steadily but rather the sensation of pulling in waves. Retrospectivly though this probably helped the smoothness of the ride rather than it being jerky.

So if you are thinking of starting to cycle regularly I would recommend getting a bicycle that is practical for day to day life rather than just that you just use once every two weeks on a road or mountain. Hopefully the result should be that you use it far more often and are generally fitter.