Taxi in Zurich? - some warnings 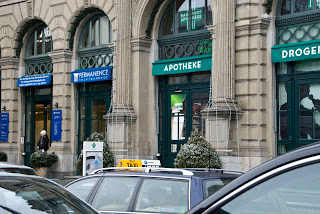 After previously praising Zurich's treatment of traffic and cyclists, it is with unfortunate irony that on this same day I received some rather rude treatment on my bike in Zurich, and got beeped at twice by Taxi drivers.

From what I have personally experienced and been advised taxi drivers here are:


1. Pure thieves.
The costs of taxis here is exponential, and in my opinion should be considered day light robbery. For example I have paid 15CHF for 2.1 kilometres on one occasion. Or 20CHF for the 2km from Bellevue to Langestrasse, seriously these are short, city centre trips.


2. More sleazy than a Silvio Berlisconi bunga bunga party.
Seriously never in another country have I been warned "Don't sit in the front seat with the driver" but a friend recently recounted her experiences with sitting in the front seat.
The story went something like this: Where she is from it is normal to sit in the front of the taxi and having only just arrived did just that after a night out. Making friendly chit chat is also the norm and after the driver ascertained that she was single and was obviously was going home alone, he started insisting that they meet up and that she should not pay for the taxi.
While most of you(guys) would probably think "free taxi" there is something very frightening about being alone in a car late at night, with a taxi driver who is getting insistent about anything. Luckily she skilfully managed to shrug off his advances and pay for her taxi.
While most of you are probably thinking "once off incident" I can assure you it is not, the same girl recently reported another taxi driver getting suggestive after she once again mistakenly got in the front seat.

3.Rude as pigs.
Cycling in the centre of any city is not easy, factor in no bicycle lanes, traffic lights and some narrow roads. So while cycling through Zurich at what I might call a very leisurely pace I was at a very narrow point in the road literally in front of the HB which is under construction, now granted the trigger for this incident was because I did a small wobble, but the only reason I wobbled was because this taxi driver was trying to pass me in a narrow space just big enough for one car and I got nervous.
The ass then had the nerve to beep at me, as if it was my fault. I mean this stretch of road is 50meters long in a construction site in the centre of Zurich. How fast do you think you are going to be driving?? Have some patience and relax, its not as if your rich client wont be able to pay the fair over an extra 10 seconds. Also taxi drivers enjoy driving driving painfully slow on empty roads during all the trips home I have had the misfortune of taking with them.

Second incident, much more clear cut and on the same journey. Slightly shaken at this first beep treatment I naively put it down to my fault as I wobbled. So carrying on with my leisurely journey I proceeded uphill at an even slower pace. Having nearly reached the traffic lights at the top of the hill I was startled by yet another  beep coming from behind. Turning around this time to check was it indeed me, I was greeted by the hurry up arm waving gestures of yet another taxi driver behind me. Turning forward again I noticed the red light a mere 20 meters ahead of me was red and proceeded to indicate this to the taxi driver using the same arm waving gesture (all while still cycling). Arriving moments later at the afore mentioned light I proceeded to stop completely and turn around to give the taxi driver a good look while indicating the red light and starting a "slow clap" to say - well done you have gained 0 time.
Rather than ignore me or seem embarrassed this Ass-hole proceeded to give me the double finger (he did have both hands free seeing as he was now completely stopped). After that I pulled up onto the path and waited for him to pass me for fear he would clip me with his car.
What a day.

The public transport here is very good and daytime taxi's have little purpose in my opinion. So from now on if its a choice between walking or getting a taxi I will be walking! Or simply stay put until public transport starts running again, as I would far rather buy drinks with the money I would hand over to the poor excuse for humanity that is the Taxi driving profession here in Zurich.

So a piece of final advice, if you are thinking of getting a Taxi - DON'T.

Here are the other options: